Built in 1908, the offices of TCF Architecture occupy a prominent corner of Tacoma’s Stadium District.

Sitting kitty-corner from Wright Park, the two-story bungalow – built originally as a grocery store and bakery –  serves as a local landmark at the intersection of I Street and Division Ave.

Since 1998, the majority of the firm’s operations were located at the upper level, with overflow conferencing, work and support space largely concealed at the back half of the lower level. When the primary downstairs tenant occupying the building’s most prominent street front facade relocated, TCF was presented with the opportunity to expand into the entire building.

Ground-level modernizations occurred in two phases, with the first (south-facing/back) portion completed in 2016, and what’s known as the “I-Street Studio” finished in 2020. 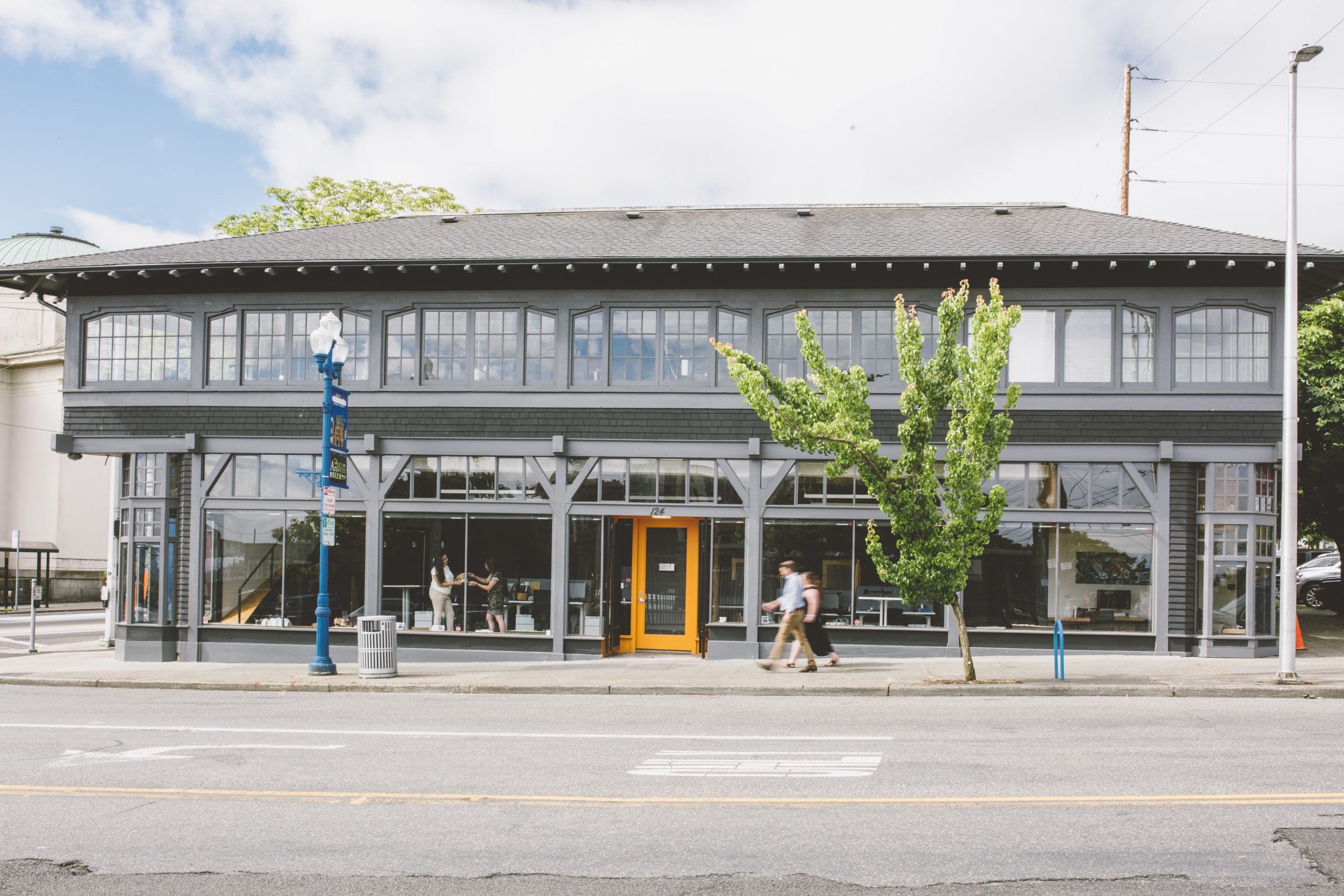 Phase 1: Let There Be Light(ness) and Art

Phase 1 sought to improve functionality and aesthetics for 2,000 sf of what was once considered an area for work and meeting overflow.  The goals: shed the “basement” stigma, and create space for art of all types to enhance collaboration and creativity among the entire TCF team.

Picture rails atop high plywood walls encourage easy display of wall-hung art; deep window sills accommodate 3 dimensional pieces. Large barn doors facilitate separation among the large conference and lounge space, and are finished in magnetic paint for posting of sketches and schedules.  A low partition that backs a long countertop converts easily from maker space for color and material board assembly, to a display surface for product vendors, to a food and beverage bar for all-office celebrations. 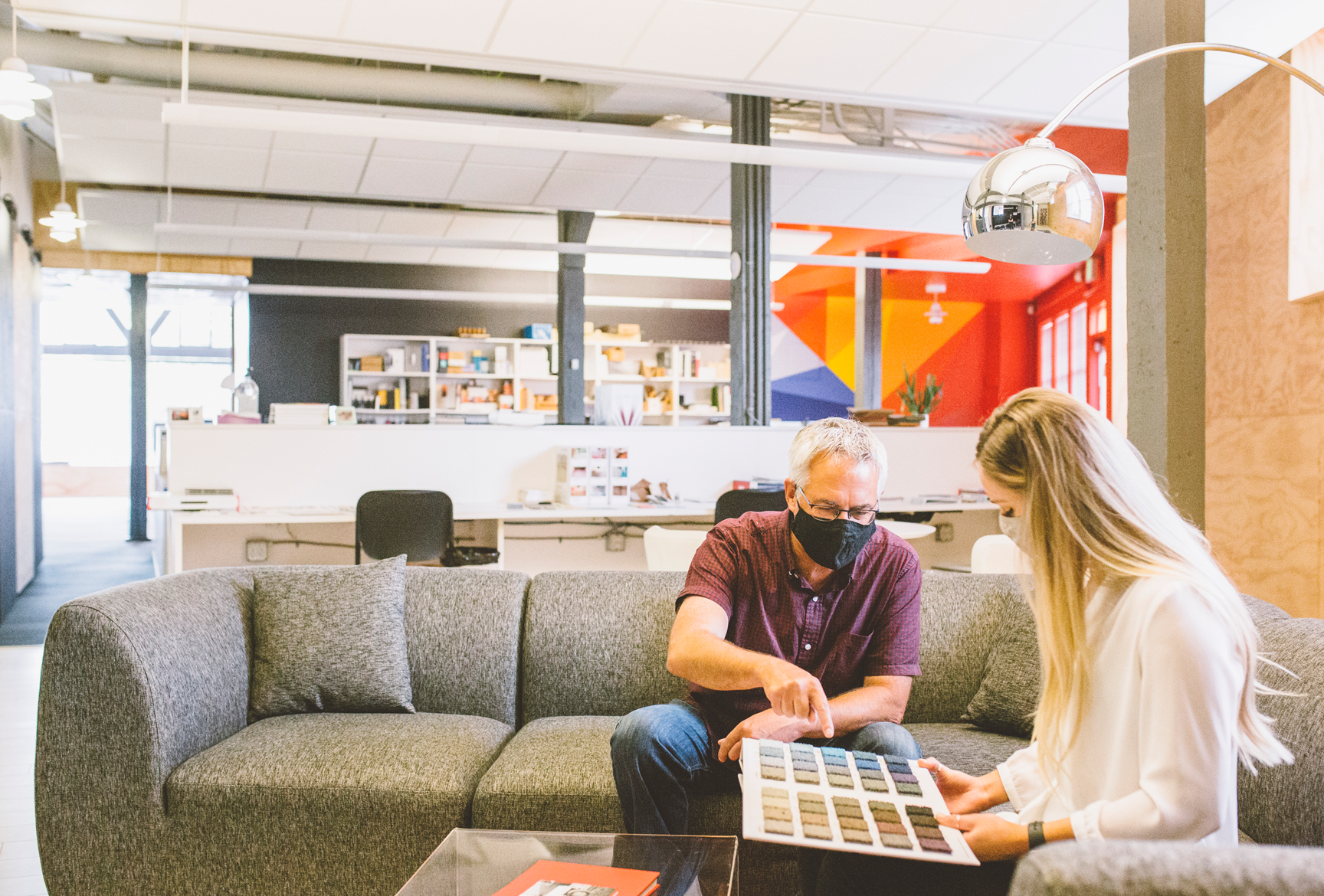 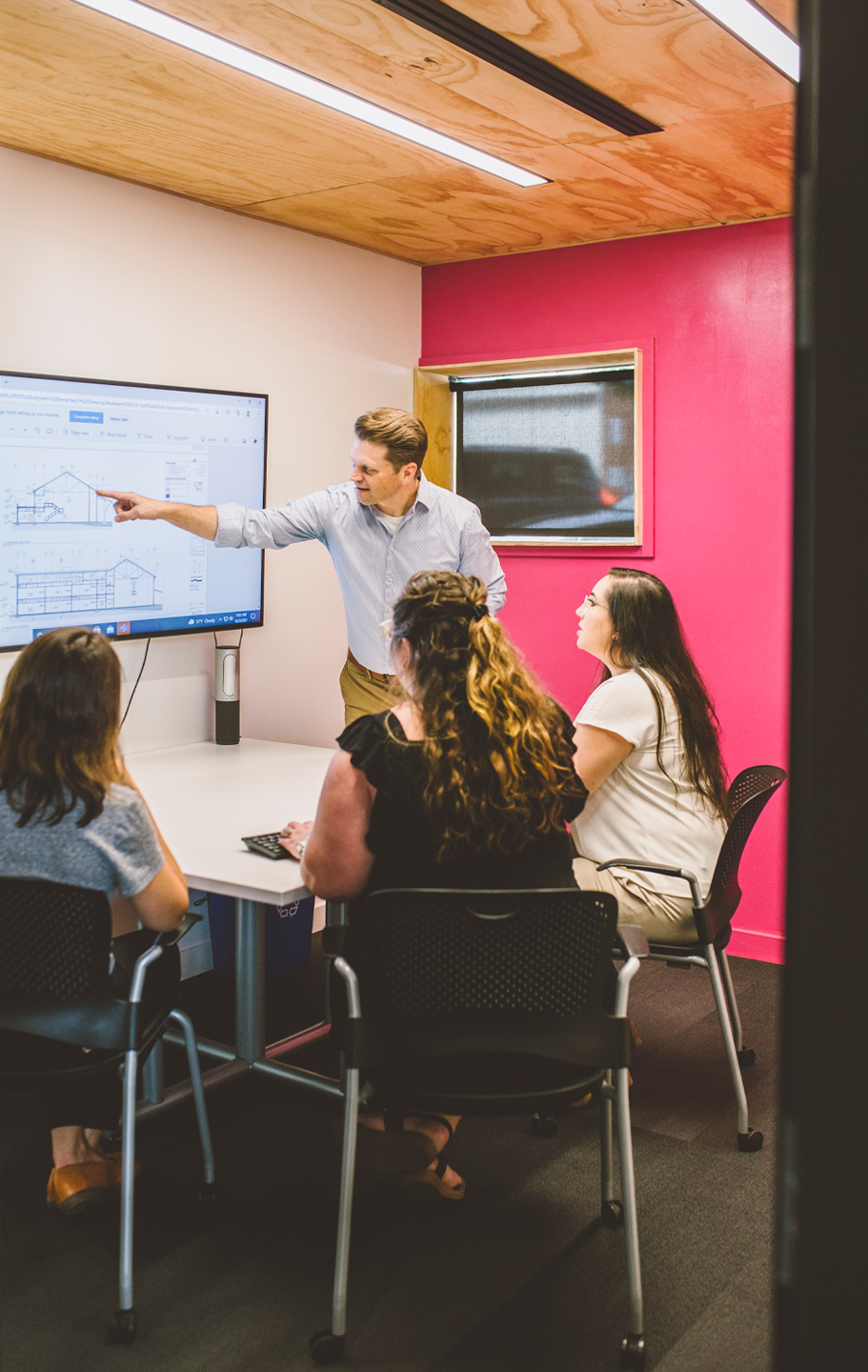 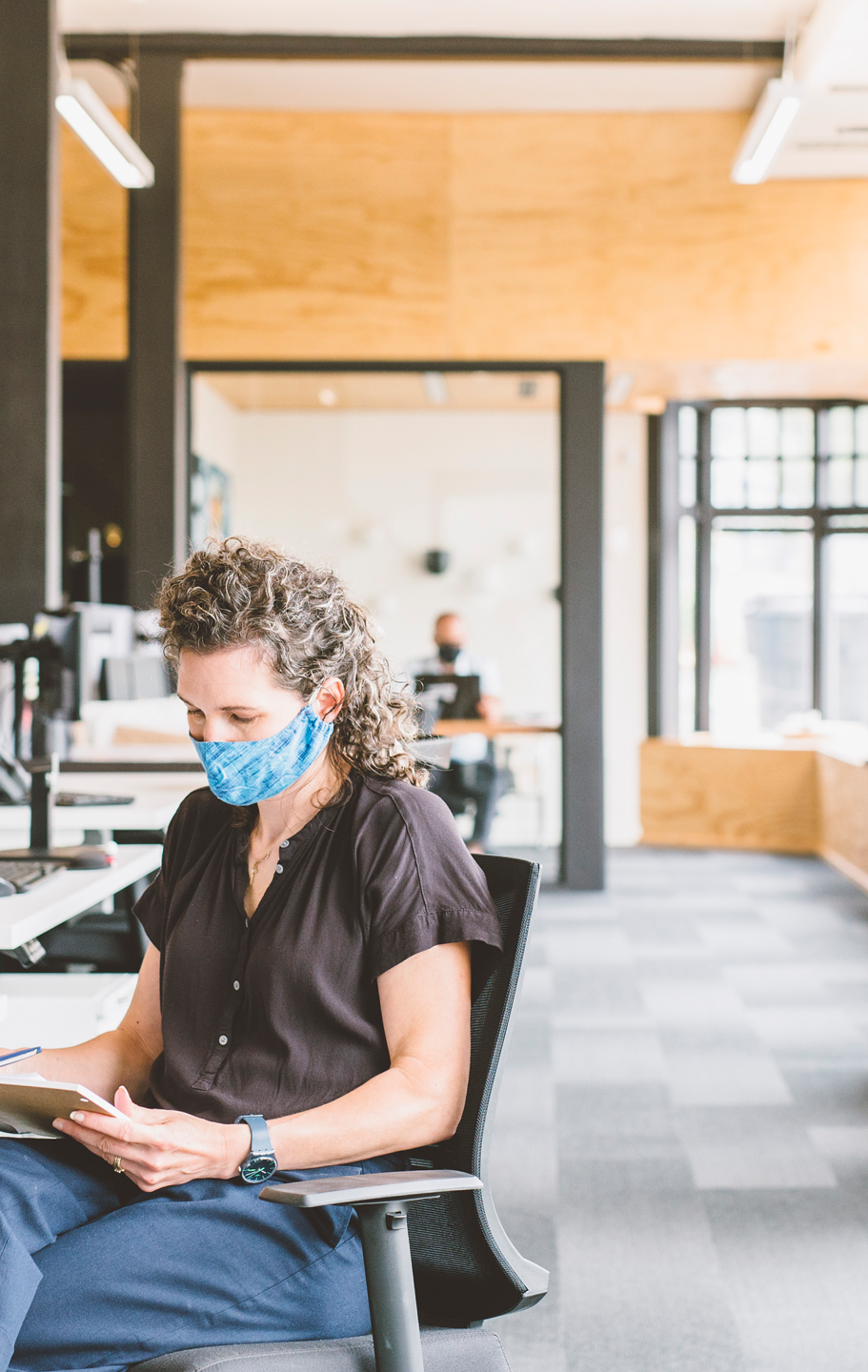 “Every space is defined by its own major material. The back of the office has plywood, with Corten (steel) at the front. This gives us the ability to experiment with materials, then see how they behave when we live with them, so that we have a comfort level in their specification for clients.”
Scott Olson

The unexpected availability of the “Subway space” that occupied the building for decades presented TCF with the opportunity to re-imagine the space fronting north I-Street for use as a third open studio.  120 linear feet of sidewalk-level transparency gives passers-by a glimpse into the inter-workings of an architectural environment, and to staff working downstairs, a closer connection with the neighborhood outside. An interior plinth at the base of the storefront provides a bench for display of architectural models; yet another strata for art hovers beneath the 12’ ceiling. At the western wall, 2 semi-open offices and 2 small conference rooms employ floor to ceiling glass to maintain the sense of openness. To the east, a formerly-hidden egress stair is now fully revealed, connecting the two levels and creating an intimate seating nook below with views directly into the park. 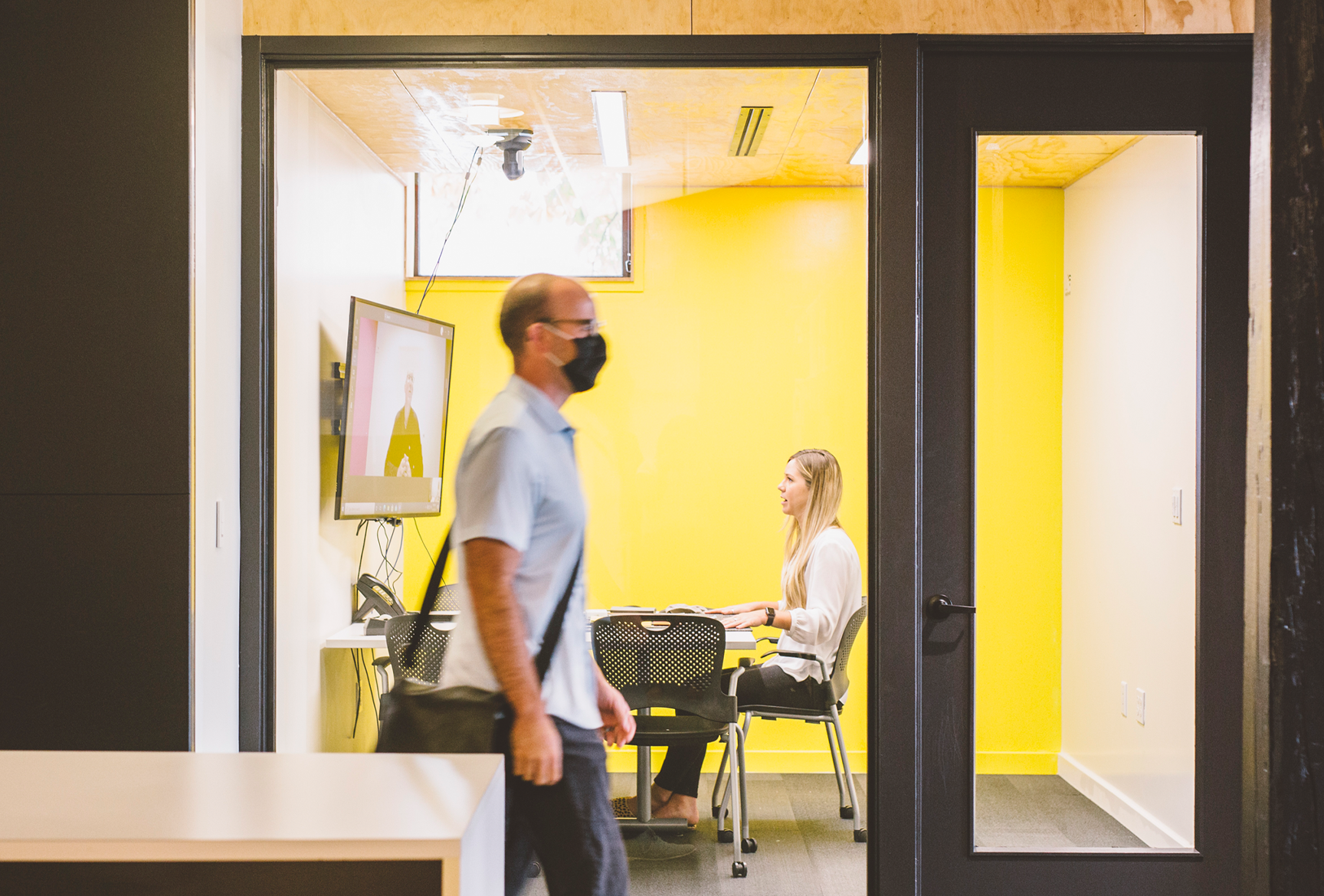 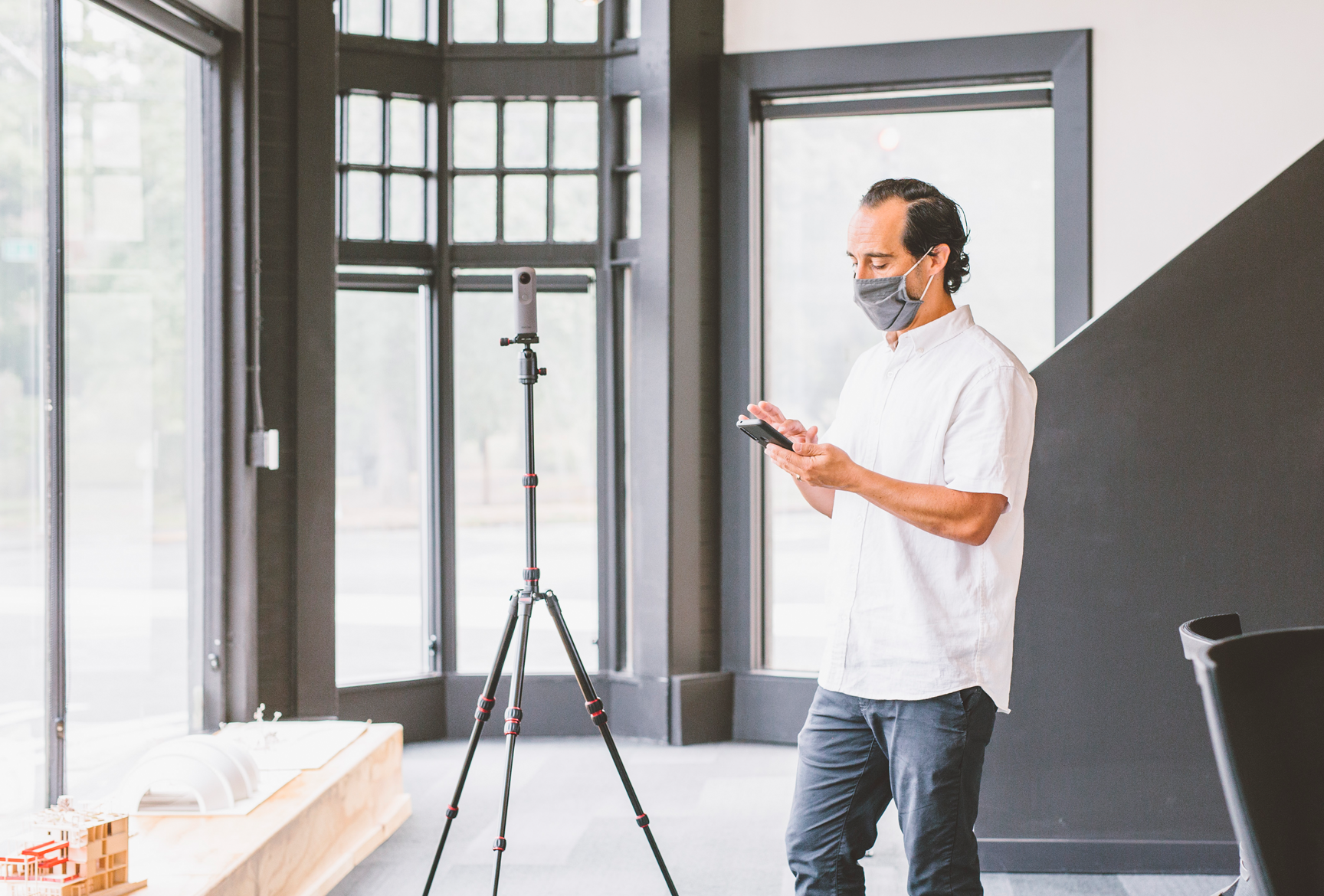 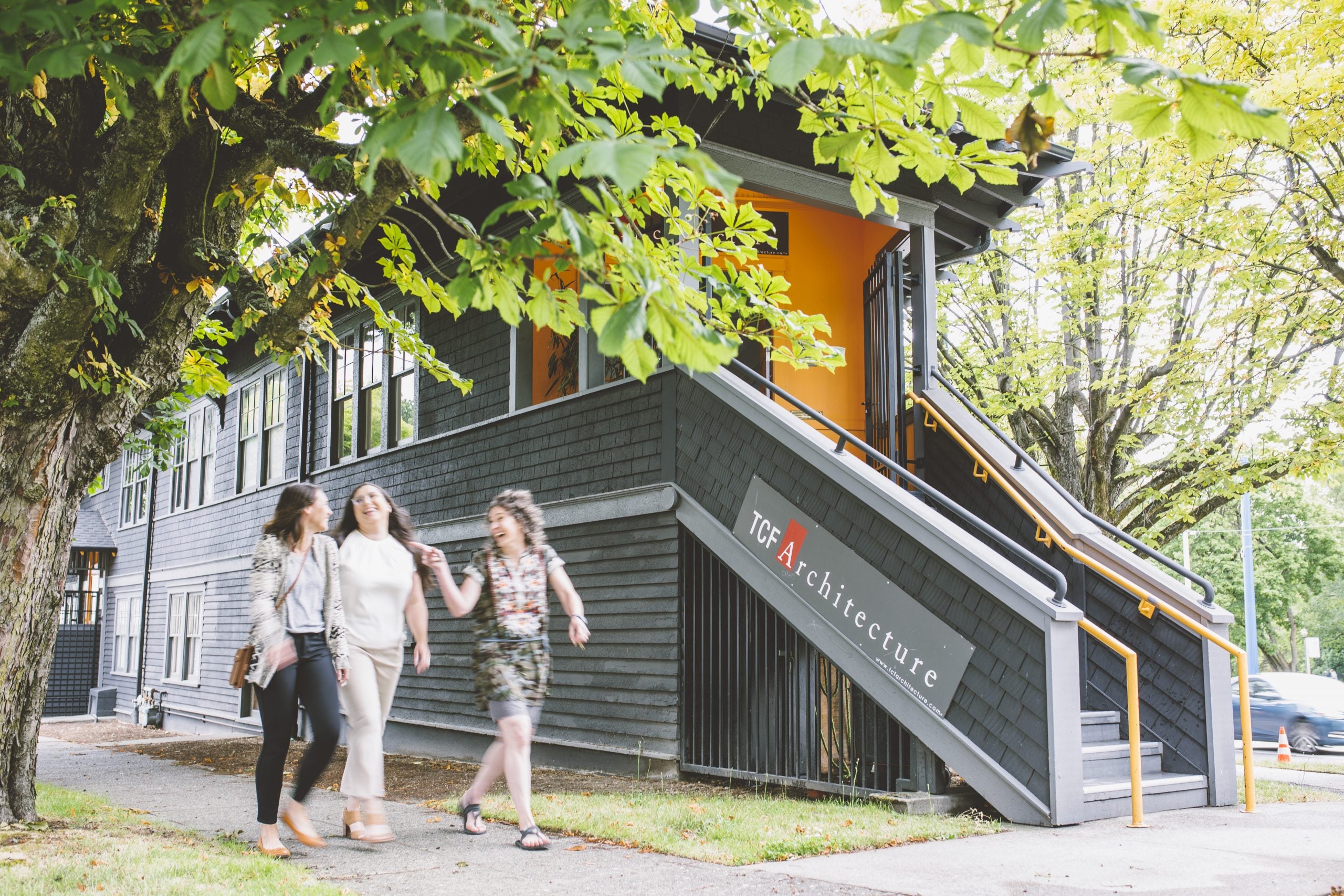